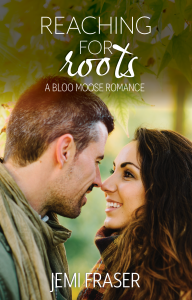 Cartoonist Emmy Rivera loves everything about the quirky town of Bloo Moose, but that doesn’t mean she’s ready to put down roots. That’s never worked out for her in the past.

Undercover agent Ryan Ward is always on the move, taking down criminal masterminds like the one who caused his dad’s death.

Ryan doesn’t expect the only connection to his latest target to be a sweet and sexy cartoonist who makes him want to rethink everything.

Putting down roots might not be so bad. If the lies don’t destroy them first.

Reviews for Reaching For Roots

It turns out, they have very different views of the man Ryan is investigating. That, and their newfound romance, puts them at odds, but I love the way their story has a full ending, showing each of them learn from one another.
Tyreanreviewer
I laughed out loud at Emmy’s new wonderful friends from the storytelling competition and the people of Bloo Moose and wish I could vacation there.
Mariereviewer
Omg I absolutely love this book so much and I couldn't put this book down as I had to see what would happen next and with all its twists and turns it was so addictive and I can't wait to read the next book in this amazing series
Jeanreviewer
The suspense that’s woven into this book has you hanging on for the next chapter and I think that it really kept the story going.
abooknutreviewer
I loved these two people and the suspense with the unfolding of details. Another wonderful story from this talented author.
Lyndareviewer
Can these two find their way back to one another? Only Jemi Fraser can find a way for these two to mend the rift, and it's pure magic! Superb!
YR Readsreviewer
I love all the moose phrases and pictures and wish I could buy some of the shirts or pj’s.
Mariereviewer
Previous
Next 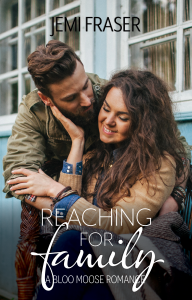 you need to make your own.